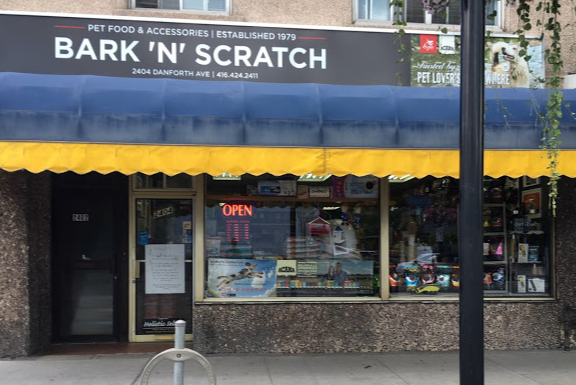 Among the Upper Beach Crowd, Bark 'N' Scratch is a landmark at the corner of Danforth Ave. and Westlake.

It seems that everyone in the neighbourhood knows Ray Cormier, the store's owner since 2006. Before Ray, everyone knew the previous owner, Jeff Baici. And before Jeff, everyone knew Doug Johnston who opened the store in 1979 at its original location at Oak Park and Lumsden, just across the street from D.A. Morrison school. In 1984, Doug made the move to Danforth and Westlake.

Staff history runs like a family tree. Doug hired 14-year old Jeff Baici as a part-timer which turned into full-time and, eventually, as the store's second owner.

Repeat with Ray Cormier who, also at 14, was hired by Jeff as a part-timer, then full-time and, as history repeats itself, became the third owner.

What does Ray enjoy most about running a pet supply store?

"The customers," he says. "They're my motivation and the reason the store is here. I enjoy educating myself on pet food and other products, and passing that knowledge along to them."

The Store is open on :